Information on Each of Pressure Cooker Parts


A pressure cooker had been very helpful in every home and was considered as valuable because it uses water.

The application of water has caused the food to be cooked in lesser time and the damaging bacteria that are present on the food can be eliminated in the cooking process.

There are various parts that make up a pressure cooker, and most of these parts are made by high quality material of steel. This is to ensure that these parts can stand firm the pressure and high temperature that is applied during the entire cooking process.

Modern homes require their cooking appliances to be colorful and stylish to satisfy their esteem, so, most companies that manufacture pressure cooking parts have made their products available in elegant designs.

Also, these parts are manufactured to be stain resistant, so, consumers will not spend much of their time on the sink washing their cookers. Below are some of the parts and their descriptions.

Information on Each of Pressure Cooker Parts 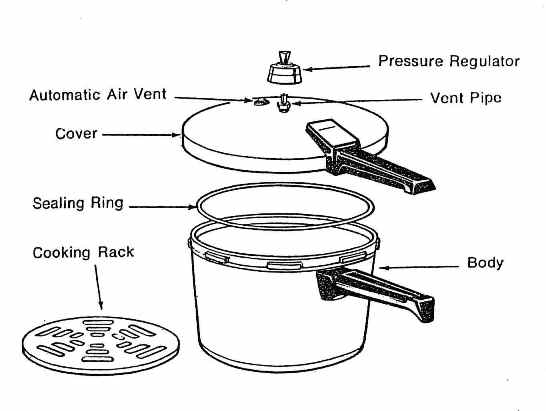 The primary function of the pressure regulator is to match the flow of the gas passing through the regulator to the required gas to be placed on the pressure cooker's system.

Also termed gasket, sealing rings makes a gas-tight to secure against leakage to prevent the steam or air in escaping between the lid and the pot.

Usually, the way for the steam to escape is by the regulator found on the lid during the building of the pressure.

In some instance that the regulator has been blocked, there is a safety valve that is provided to take place the escape path of the steam.

Click here to know how to Handle Pressure Cooker Seals

The purpose of bracket is for the users to be in ease of using the pressure cooker because of its better grip.

Safety is also promoted if the cooker has not much experience on the area of cooking as it will help them to cook their food safely.

The thickness of the bracket is just enough and has the property to resist corrosion because it is made of high grade of steel.

This provides the necessary hold to manage heavy cooking. It has better thickness and has the ability to withstand oxidation.

Commonly, handles are also made of high quality steel and this material has Bakelite on it so that it can resist heat for longer period of time.

This part has the composition of pure stainless steel and has the purpose of closing the mouth of the pressure cooker.

The way of locking the lid on the body of the pressure cooker is by moving the receptacle in sideways position.

It is advised to lock the pressure cooker before cooking. In event that the lid is not fastened or locked, there will be a widespread of pressure and the food will not be properly cooked.

From Pressure Cooker Parts Back to best-pressure-cooker.com